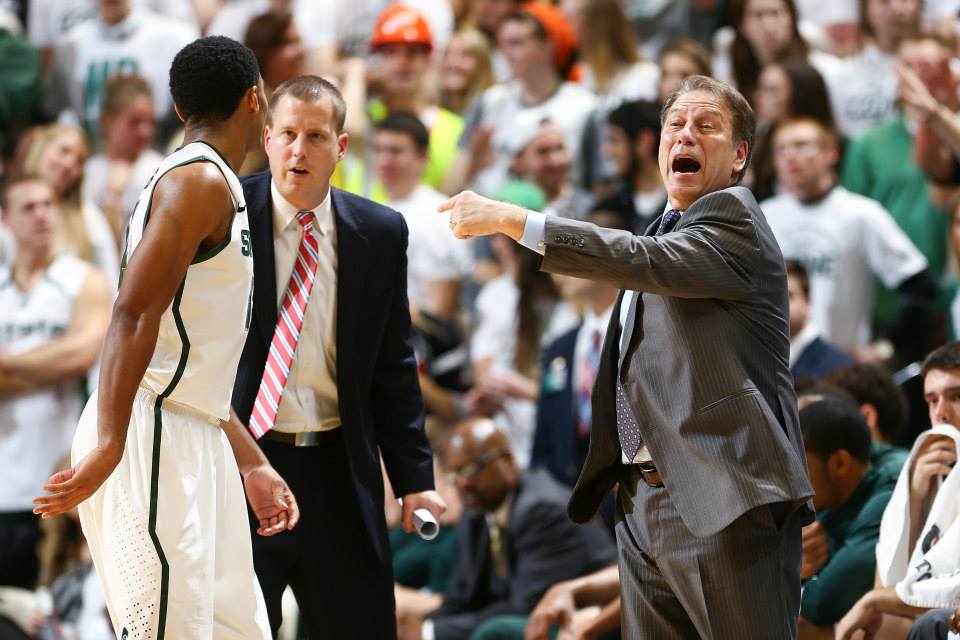 FEB 7 – Number 9 ranked Michigan State (20-3, 9-1) cannot catch a break. As soon as Adreian Payne finally returns to the starting lineup, Coach Izzo announces that Keith Appling is out with a sore wrist. Not a good game to be missing your starting point guard. Penn State (12-11, 3-7) had won three consecutive games including at Ohio State in overtime. The Spartans struggled early in their last matchup with the Nittany Lions on New Year’s Eve, but this game was a different story.

Already up 13-8, MSU went on an 11-0 run with over 10 minutes remaining in the first half to open up a 22-8 lead. Payne received a standing ovation when he checked into the game for the first time. He scored 10 points and grabbed two rebounds in the first half. Redshirt freshman Kenny Kaminski got the start and led the Spartans in scoring through 20 minutes with 13 points. He was a perfect 3-3 from beyond the arc and 5-6 from the field. Michigan State held a 46-30 lead at the break.

It was all MSU in the second half, with the lead growing to as big as 26. The Spartans cruised past Penn State 82-67. Kaminski was lights-out all night, finishing with a career-high 19 points on 7-9 shooting. Denzel Valentine turned in another outstanding performance, just four assists away from a triple-double. His line was 11 points, 11 rebounds and six assists. Penn State never held a lead for the entire game. Here are three key factors that contributed to Michigan State’s dominant win.

1. Payne shows no signs of rust

Adreian Payne had not played since January 7, but you couldn’t tell by watching him against Penn State. The senior had 10 points in the first half and looked dominant inside and out. His jumper was falling and his post moves were effective. Coach Pat Chambers of Penn State described Payne’s return in the post-game press conference.

“He played great. It was like Willis Reed coming off the bench, the crowd was going crazy; it was a standing ovation. They used that, Coach Izzo used that really well as motivation for his team and for the crowd.”

Payne only played 18 minutes but made the most of his time. He finished with 12 points on 5-9 shooting and did not look hesitant at all. The Spartans couldn’t have had him back at a better time with a tough roadie in the Kohl Center coming up on Sunday against Wisconsin. While the Badgers are starting to fade, Bo Ryan’s teams always play tough on their home court.

2. Even with injuries, Spartans have great depth

Coach Izzo surprised everybody when news broke that Keith Appling would not play against the Nittany Lions.

“I had talked to Keith [Appling] the night before and it sounded like things were getting better. Then the trainer calls and says that he can hardly move his wrist. We had specialists look at it and we’ve gone through all the x-rays and everything. It is kind of a strange deal – I don’t know if it’s locked up or what. They’ve done some work on him, but the poor guy missed his first game here.”

There was a thought in the back of everyone’s mind that they could give MSU a good game. But those fears were put to rest within the first 10 minutes of the game. Tom Izzo is lucky to have such a plethora of talent on his team with all the injuries they’ve dealt with this year. MSU has used 12 different starting lineups in 19 games, and Coach Izzo characterized some of the lineups as “goofy”.

Denzel Valentine stepped up in the absence of Appling and ran the point extremely well, sharing with Travis Trice.

“Early in the game he [Valentine] was a bit out of control there – just going in and throwing the ball up. We took him out for a little bit, settled him down a bit and then I thought he play phenomenally – rebounding wise, defensively, made some shots, made some great passes, and did a great job on the boards,” said Izzo.

Even Coach Chambers had high praises for Valentine’s level of play.

“He really got things going. He played great. He did a lot of little things. He’s a tough matchup for us; he’s a big guard. When he’s knocking down his shot, it’s tough; it’s tough to defend him. He got in the paint a lot. He did some really good things; made winning plays for that team.”

Matt Costello did a great job complimenting Payne down low, going for 10 points on 3-3 shooting and six rebounds. He was also solid at the line, making four out of five. He gave Payne the opportunity to ease back into the game without feeling the pressure of being the main scorer in the post.

Kenny Kaminski had the best game of his career. He made his first five three-pointers of the game, including one from the top of the key that banked in.

“I think they hit a bank at the top of the key, that’s when you know it’s not your night,” said Chambers.

Kaminski has been up and down all season, so this performance was extremely important for the redshirt freshman. He not only hit threes, he played better defense and actually used his size to grab two rebounds.

3. The Big Ten race is going to be fun

Michigan State and Michigan are tied atop the Big Ten standings, with the rest of the pack at least three games behind. The Wolverines have a tough stretch coming up, starting on Saturday when they travel to Iowa. Then they face Ohio State in Columbus, Wisconsin comes to Crisler, and then MSU returns for revenge on the 23rd. Coach Izzo likes the lead he has, but is definitely not comfortable with it.

“We are both competing; I think the next closest team has four, five loses. Not that I feel comfortable with that in any way, because the schedule the way it is who plays who twice. There is no levelness to it. Doesn’t mean you have played one-through-nine and nine-through-one. It doesn’t go how it used to go. So you could have some tough road games. We have some tough games coming up now. So I just feel good that we are in the hunt right now,” said Izzo.

Michigan State’s next game is on Sunday against Bo Ryan’s Wisconsin team. The Kohl Center has always been a difficult place to play, no matter who suits up for the Badgers. Wisconsin has lost five of their last seven games after starting 16-0, but they are still one of the toughest teams in the conference. The game is at 1:00 pm and can be seen on CBS or heard on the Spartan Sports Network.