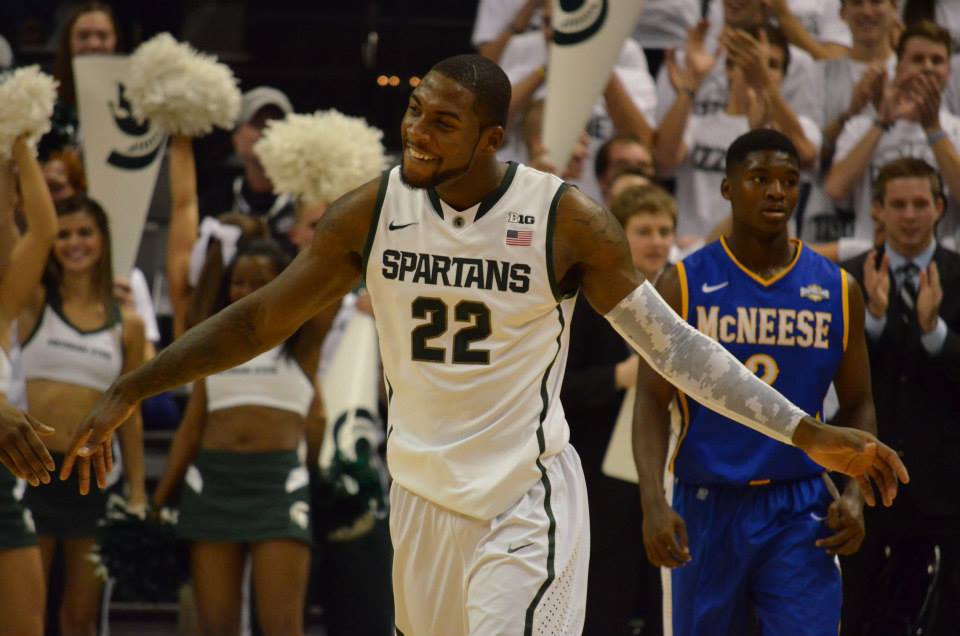 MARCH 23 – Harvard almost blew up everybody’s bracket on Saturday night. That is, if your bracket has not already been blown up.

With 17:38 remaining in the game, a Branden Dawson throw-down gave the No. 4 seeded Spartans a 16-point lead and all of the momentum they needed to bury No. 12 Harvard, but the Crimson pulled the upset in the second round, and they had their eyes on the Sweet Sixteen.

A pair of Brandyn Curry three-pointers cut the lead to 11 with 15 minutes to play. After a Gary Harris dunk, Harvard went on an 8-0 run and tied the game in a blink of an eye. On the ensuing MSU possession, Big Shot Gary came down and hit a huge three-pointer from nearly NBA range to stop the run and give the Spartans a 58-55 lead with under nine minutes left.

A few possessions later, a defensive lapse left Harvard’s best shooter, Laurent Rivard, wide open in the corner for an easy three that gave the Crimson a two-point lead. At this point, most Spartan fans were hyperventilating into a brown paper bag.

MSU showed just how much resiliency they had and went on their own 8-0 run, capped off by a Harris three, causing Harvard to call a timeout with 5:34 left, down by six points. Harvard could not cut into the lead for the rest of the game, and Sparty hung on to win 80-73.

Dawson did his best impersonation of Adreian Payne on Saturday night, exploding for 26 points on an incredibly efficient 12-15 shooting. Dawson has been playing extremely well since the start of the Big Ten tournament, averaging 16.2 points and 7.8 rebounds in that span. His shooting has been phenomenal as well, going just over 62 percent from the field this season.

Harris woke up from his second round slumber to add 18 points and five assists, including a few cold-blooded threes to keep MSU in the game. Payne cooled off from his supernova game on Thursday with only 12 points and four rebounds. The big man was in foul trouble for most of the game.

Up next for Tom Izzo’s squad is the winner of No. 1 Virginia and No. 8 Memphis.

Blake Froling is the co-host of Impact Izzone for Impact Sports.