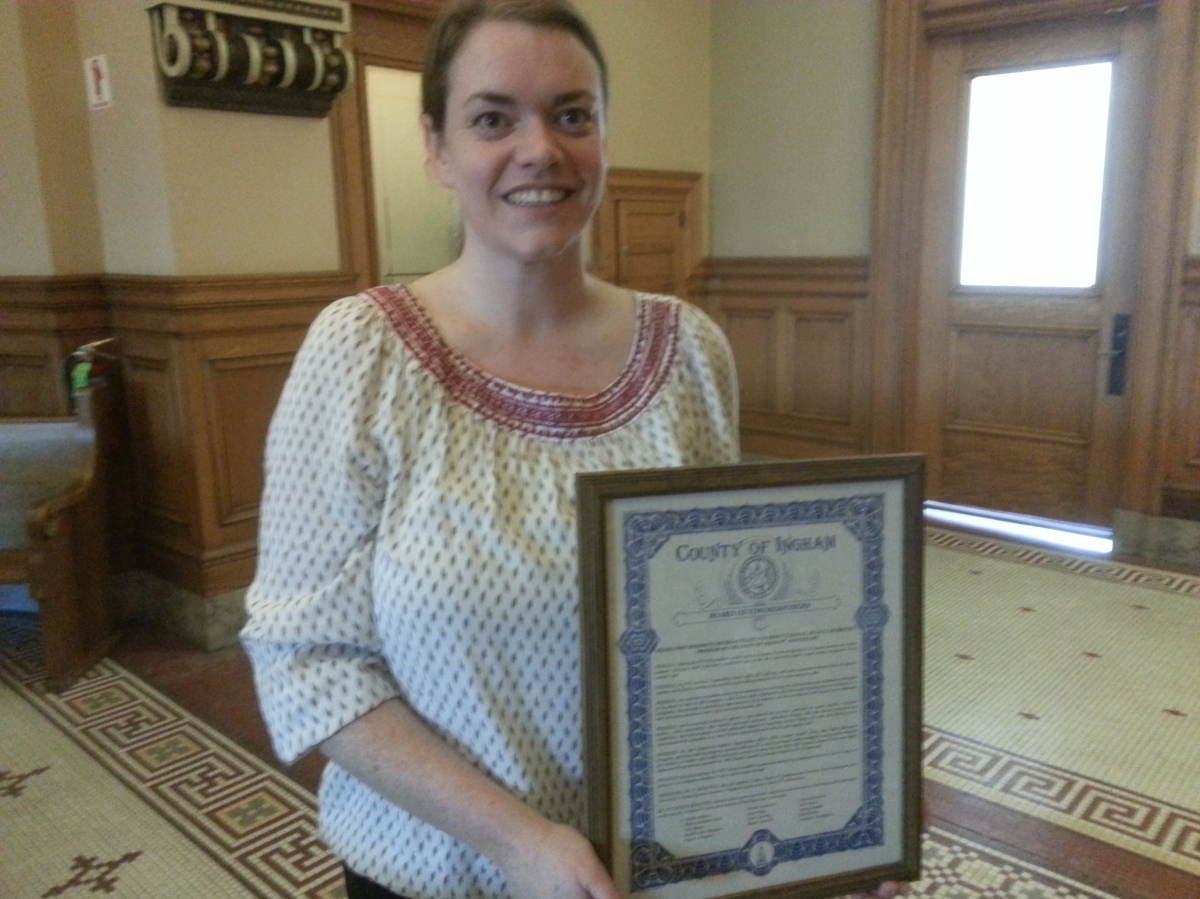 (March 30, 2015): The Ingham County Board of Commissioners formally recognized the 35th anniversary of Michigan State’s sexual assault awareness program during its March 24 meeting.

Board member Penelope Tsernoglou presented the recognition to Lauren Allswede, a therapist with the program, and gave her a framed copy of the resolution.

“I’ve heard really great things about it from the community, and we just wanted to recognize their anniversary,” said Tsernoglou. “I know they’ve been a big part of the MSU community and that a lot of other places don’t have programs like this, so we’re very fortunate to have this program.”

The sexual assault program was first established during the 1979-1980 school year and offers services such as a 24-hour crisis line, counseling for victims as well as medical support through Sparrow Hospital.

“We’re the first and oldest campus-based sexual assault program, and I think that speaks for itself because that’s not just Michigan, that’s nationwide,” said Bianca Segura, the advocacy coordinator for the sexual assault program. “I’m really excited that they recognized the program and the services that have been offered.”

The program is funded mostly by the Victims of Crime Act (VOCA) and received $201,038 for the fiscal year of 2015, according to its Michigan State University sexual assault program. The university also provides a portion of the funding.

“VOCA funds positions that do direct service like therapy and our advocacy coordinator,” said Allswede. “Without that money we wouldn’t really be able to do a lot of the counseling, the support groups, meeting people at the hospital. That’s what really makes it possible to do anything.”

Currently, the program has more than 100 volunteers and two full-time therapists. The university has recently allocated additional funds to hire a third therapist. The program also offers legal advocacy for victims.

According to the sexual assault program’s website, it served 565 people between October 2013 and September 2014, including 415 adult sexual assault survivors. Women accounted for nearly 89 percent of the people who received help from the program.

“It started with one position in 1981 that was like a half-time position, and it’s grown tremendously since then,” said Allswede.

The office of the sexual assault program is located in room 14 of the student services building.