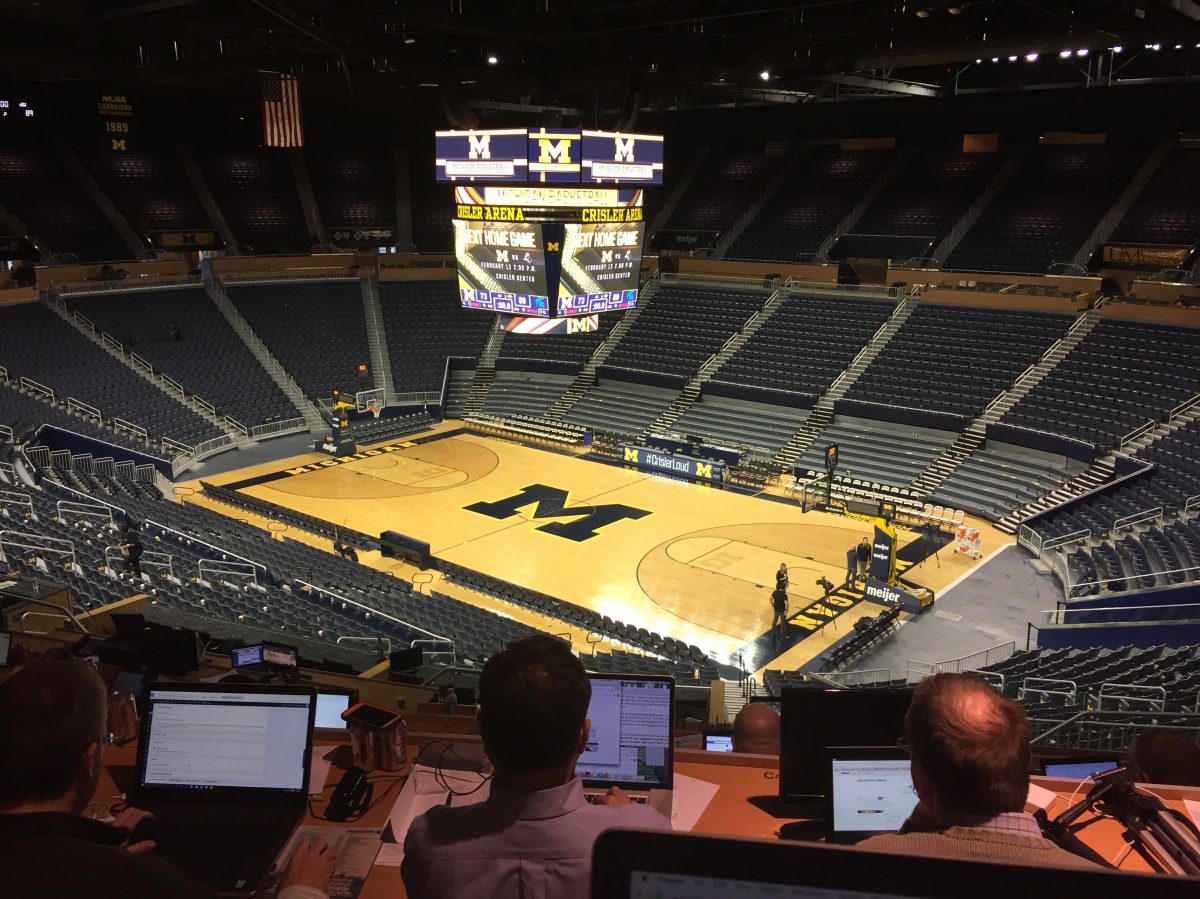 “To say I’m ecstatic about the performance would be underserving what we did,” said Coach Izzo after the game.

Bryn Forbes was named the new mayor of Ann Arbor after Saturday’s 89-73 MSU wallop. The senior elevated above human status with his electrifying stroke from outside. Forbes opened up 5-5 from distance and single-handedly sucked the air out of the Crisler Center in the first half.

On the other side of the ball, Michigan knew they had to hit the three ball if they wanted to stay competitive. That didn’t exactly happen. The Wolverines opened the game shooting a brutal 1-7 from three, resulting in a 26-11 MSU run. Forbes capped off the hot streak with another long gun to push the lead to 29-11 with 8:04 to play in the first.

The once-raucous Michigan crowd finally got something to cheer about when the Wolverines awoke from their shooting slumber to put together an 11-4 run. The lead was cut to 11 with 4:41 to play in the first half, and shimmers of hope began to creep back into Crisler Arena.

State eventually pushed the lead back to 16 at halftime. For U of M, this was coming off the heels of a shellacking at the hands of the Hoosiers a few days ago. Not good.

Michigan State had a clear size advantage in the post, but the Spartans rarely went inside. When the jumpers are falling, layups just seem so inefficient. Playing with a lead in the second half, MSU started to look inside more. Denzel Valentine was able to penetrate for open shots and the bigs muscled their way in the post.

Meanwhile for Michigan, three-point specialist Duncan Robinson wasn’t so special. He finished 0-3 from deep and hardly made any impact on the offense.

“I told our players we have to guard (Duncan) Robinson like we guard Forbes,” said Izzo. “I thought we did a pretty good job on Robinson.”

The Wolverines were especially weak inside when Mark Donnal was forced to sit on the bench with three fouls just five minutes into the second frame. However, Michigan led the points in the paint margin for most of the game, largely due to MSU settling for outside shots.

Unfortunately for Michigan, the worst was yet to come. The threes kept falling for the Spartans, and the Wolverines kept bricking. The lead widened to 69-42 midway through the second half after a thunderous transition dunk by Matt Costello. That was all she wrote.

MSU amazingly finished with a 65 percent mark from the field, their best since Boston College when they shot 62.7 percent. That’s now four of MSU’s last five games shooting above 50 percent from beyond the arc. Even Michigan coach John Belein said he’s “never seen anything like this before” in his life.

Valentine quietly put together another outstanding performance. The senior was an eyelash away from another triple-double, putting up 21 points, nine rebounds and eight assists. Not bad.

“I didn’t want to leave him in there,” said Coach Izzo, “but the guy was close to a triple-double which would have been an incredible feat for him here. But the victory was every bit as good.”

It was Forbes and his unworldly shooting who cast a large shadow over the game with his 29-point outburst. His eight three-pointers were just as many as the entire U of M side made. Also not bad.

The bigs for MSU were supposed to dominate the game and control the scoring. Instead it was the outside shooting that was key. Costello was a mark of consistency throughout the game, going for 14 points and nabbing eight boards. Just what State needed down low.

“I think he’s kind of an unsung hero that we don’t appreciate as much,” said Izzo, “but I’m starting to appreciate him more and more.”

Michigan is falling on extremely hard times, now losing two home games in a row by double digits and trailing at halftime by 21 and 16 points, respectively.

“I’ve been in Michigan’s shoes,” said Coach Izzo, “I told John (Belein) that after. There’s no rhyme or reason why one day you play good one day you play bad. It seems to be an epidemic this year.”

Up next for the Spartans is a marquee matchup with the Purdue Boilermakers in West Lafayette on Tuesday. Purdue is a polar opposite of Michigan, with tons of bigs and not much perimeter play. Costello and Deyonta Davis will face their toughest frontcourt test yet. Tip-off is scheduled for 7 p.m. and can be seen on ESPN.