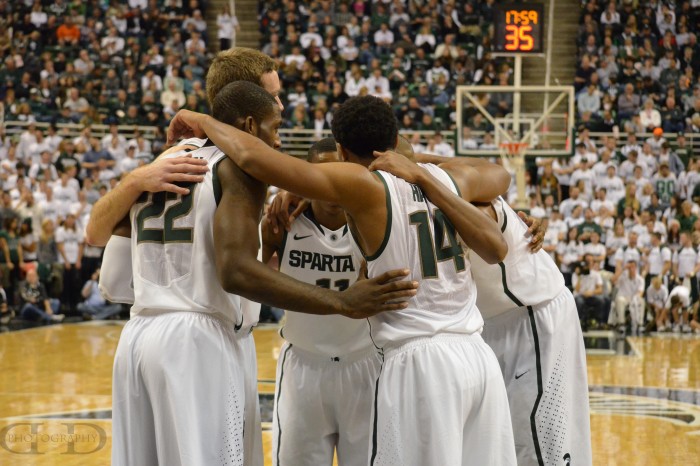 Here are the best-case and worst-case scenarios for the Spartans’ “Big Three.”

Best-case scenario – Valentine turns into the team leader that Coach Izzo has dreamed he could become. The junior steps up as the team’s primary scorer with Gary Harris and Adreian Payne now gone. He has all the tools to be this team’s best player and is already its most well rounded.

Last season, he was fifth on the team in scoring, third in rebounding and second in assists. He is versatile enough to play three positions on the court and will be a matchup nightmare for opposing teams. Valentine will average 15 points, six rebounds and five assists per game and make first-team All-Big Ten.

Worst-case scenario – The turnover problem that put Valentine in Izzo’s doghouse on more than one occasion will come back in the worst situations. He plays out of control and loses the confidence of his team and coaches. He forces shots and tries to make plays for himself that just are not there.

By February, Valentine will be pulled out of the starting lineup in favor of a budding freshman like Javon Bess or sophomore Alvin Ellis III, who is itching to prove himself. He will average nine points and five rebounds per game.

Prediction – Valentine will fill the leadership role on this team and shoulder most of the scoring load. Stat line: 14 points, six rebounds and three assists per game.

Best-case scenario – For the first time ever, Trice goes an entire season avoiding the strange injuries that have plagued him throughout his career at Michigan State. He starts every game at point guard and plays the role of facilitator that is also a threat to score. He will not take over games, but will be deadly from beyond the arc as he was last year.

Trice will also become a more vocal leader on and off the court while providing guidance for younger players like Lourawls ‘Tum Tum’ Nairn Jr. and Ellis. Averages 10 points and seven assists per game, while shooting 45 percent from the field and beyond the arc.

Worst-case scenario – The odd injury bug once again bites Trice. He only plays in 10-15 games in the season and is ineffective when he is actually on the floor. He becomes too passive with the ball in his hands and loses his shooting stroke. His leadership role is vastly diminished because of his extended absence.

This leads to more playing time for an inexperienced Tum Tum, who looks like a deer in the headlights against the big opponents MSU has to face on the road, and becomes a turnover machine. Averages five points and two assists per game in 15 appearances.

Prediction – Trice starts nearly every game for the Spartans and thrives with the expanded role. Stat line: Nine points and five assists per game, shoots 46 percent from the field and 40 percent from deep.

Best-case scenario – Dawson has the highest ceiling of anyone on the roster. Fans saw glimpses last season of how dominant he can be when he wants to. After forgoing the NBA for his senior year, he is out to prove he can be a solid first-round pick after this season. His motor will cease to be a question mark after proving himself the first few games.

Dawson’s jump shot will start to become respectable. He will be able to shoot over defenders that sag off him and blow by defenders that play up tight. BJ’s freakish athleticism will allow him to comfortably play power forward despite being only 6-foot-6. He will average 15 points and 10 rebounds per game and earn All-American honors.

Worst-case scenario – The motor will be spotty at times and could earn him a trip to the bench on more than one occasion. Dawson’s jump shot will remain a handicap and defenses will simply clog the paint when he gets the ball.

The smaller lineup that the Spartans will be forced to use will hurt them on defense and Dawson will not be much help against Big Ten centers. He will average 11 points and seven rebounds per game.

Prediction – Dawson will shrug off all questions about his motor, but his jump shot will be spotty at best. Stat line: 13 points and nine rebounds.