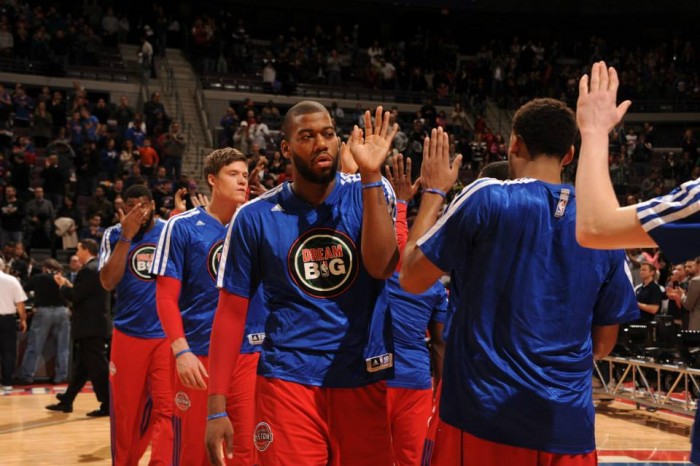 JAN 21 – After a MLK Day drubbing by the Los Angeles Clippers, the Detroit Pistons found themselves with a record of 17-24. At this time last year, an “inferior” Pistons squad was 16-25. The addition of superstars does not guarantee success, I suppose. Detroit must do something to break out of their funk and take advantage of a weak Eastern Conference, and it starts with the starting lineup.

Coach Mo Cheeks likes to have Andre Drummond, Greg Monroe and Josh Smith on the court at the same time. While this combination may be physically imposing, it also creates problems. Spacing has been a major concern ever since Smith signed on the dotted line and those concerns have not gone away with time.

Drummond is ineffective outside of five feet. Monroe has slightly more range than Drummond, but likes to utilize post moves. Smith is at his best when he drives to the basket, but has a tendency to jack up more than the occasional three-pointer. With the paint so congested, defenses can collapse down low and deny any penetration.

The Pistons need to make a change to their starting lineup, and they should go smaller. According to nba.com, the Pistons are dead last in opponent field goal percentage from 15 to 19 feet and 20 to 24 feet. Opposing teams take advantage of Detroit’s lack of athleticism and quickness by drawing the bigs out of the paint and creating mismatches. While on offense, the Pistons are in the bottom five in field goal percentage outside of 10 feet, yet they are No. 3 in field goals attempted from 25 to 29 feet.

Now to the backcourt. With Rodney Stuckey finally playing at a high level, I believe he should be in the starting lineup instead of Kentavious Caldwell-Pope. Using nbawowy.com again, the combination of Brandon Jennings and KCP produces 1.035 points per possession while shooting 44.5 percent. With Jennings and Stuckey together, they produce 1.103 ppp and shoot 46.5 percent.

Coach Cheeks usually gives both players the same amount of minutes, but Stuckey is vastly outplaying the rookie. Using per 36-minute stats to make things perfectly even, Stuckey shoots nearly seven percent better from the field and almost doubles the rookie in scoring. I can understand wanting to give KCP experience, but the Pistons should be in panic mode right now. Start Stuckey and the offense immediately improves.

There have been strong rumors that the Pistons will be active before the trade deadline. Most people think that Monroe will be dealt because of his expiring contract and the fact that his agent will push for a max contract over the summer. With Stuckey also having an expiring contract and playing so well this season, he could be thrown in to sweeten the deal and help with the salary cap.

The strongest rumor has been Monroe and Stuckey for Arron Afflalo and Tobias Harris of the Orlando Magic. Afflalo, a former Piston, is having the best season of his career, averaging 20.9 points and 4.6 rebounds per game. This could be a fluke season (see Charlie Villanueva) or the birth of a great young player. Harris is also playing much better than his career numbers. He is averaging 13.1 points and 7.2 rebounds per game at just 21 years of age.

Whatever the Pistons do, they need to do something before it is too late. If the Smith/Jennings signings do not result in a playoff birth, then look for Joe Dumars to be out the door very quickly.