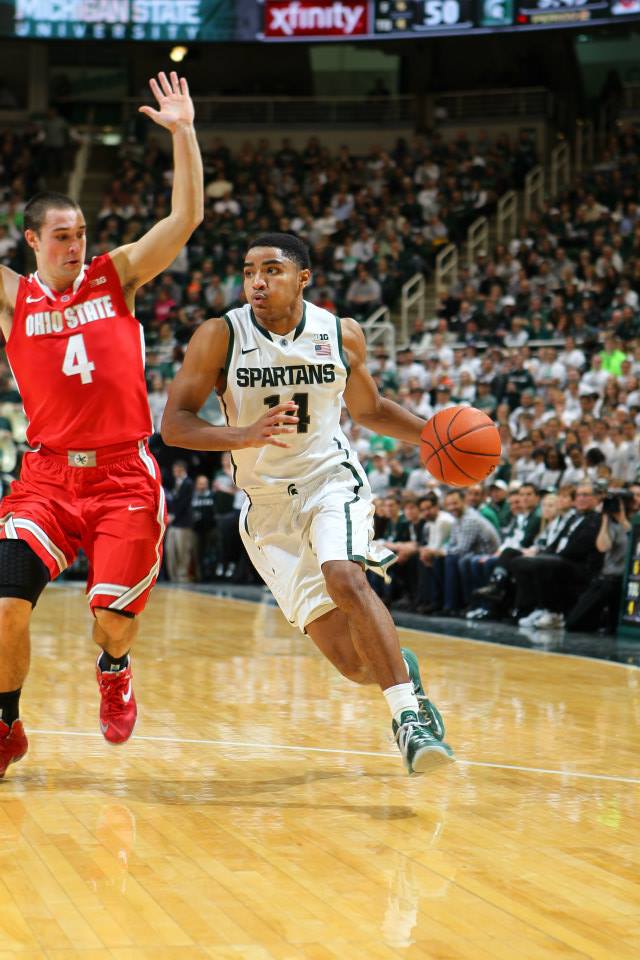 JAN 7 – When talking about Ohio State, the first player that comes to mind is most likely point guard Aaron Craft.

In his senior season with the Buckeyes, Craft is the leader of an undefeated and third-ranked team heading into only its second true road game of the season. He is not expected to put up 20 points a night, but defense is how he earns his keep.

Craft is not an offensive powerhouse, but is efficient when he has the ball in his hands. He averages 4.9 assists per game, good enough for second in the Big Ten. He rarely turns the ball over either, with an assist to turnover ratio that is second in the conference. He is fourth in scoring for the Buckeyes with 9.3 points per game and shoots a solid 48 percent from the field.

In his last two regular season games against the Spartans, Craft averaged 13 points on 45 percent shooting and recorded six assists and three steals between the two games.

But Craft makes his money on defense, as some experts say he is the best perimeter defender in the nation. He does not tower over the guards he faces off with, standing 6 feet 2 inches tall, but relies on his lateral quickness and his hands to harass defenders and get into passing lanes. His 2.5 steals per game leads the Big Ten.

According to basketball-reference.com, Craft leads the nation in Defensive Win Shares (an estimate of the number of wins contributed to a player by his defense) with 1.7. The scary part about Craft’s defense is that it is getting better. His Defensive Rating (an estimate of points allowed per 100 possessions) is nearly ten points better so far this season than it was last year at 81.7, good enough for third in the Big Ten.

Craft will most likely match up against Keith Appling tonight. Appling is averaging 15.6 points per game this season, twelfth in the Big Ten. He shoots efficiently from beyond the arc and can explode toward the basket. In his last three games, Keith is shooting 54 percent from the field, including 61.5 percent from downtown. He is also the main distributor in the Spartans’ offense, leading the team in assists with 4.6 per game.

Offensively, Appling has a strong edge over Craft. Offense is not a main focus for Craft, who takes more than four fewer shots per game than Appling. Craft has one inch and ten pounds on Appling.

Craft will have to use his quickness to keep Appling from driving by him and has to get in passing lanes early and often. Appling will have to hit his jump shots and three pointers to have success against Craft.

My prediction is a 73-69 Spartan win. Appling will score 12 points and dish out five assists. Craft will have eight points and four steals. The Buckeyes are good, but they hardly have any road experience this season. The Izzone will definitely be the sixth man on Tom Izzo’s squad.