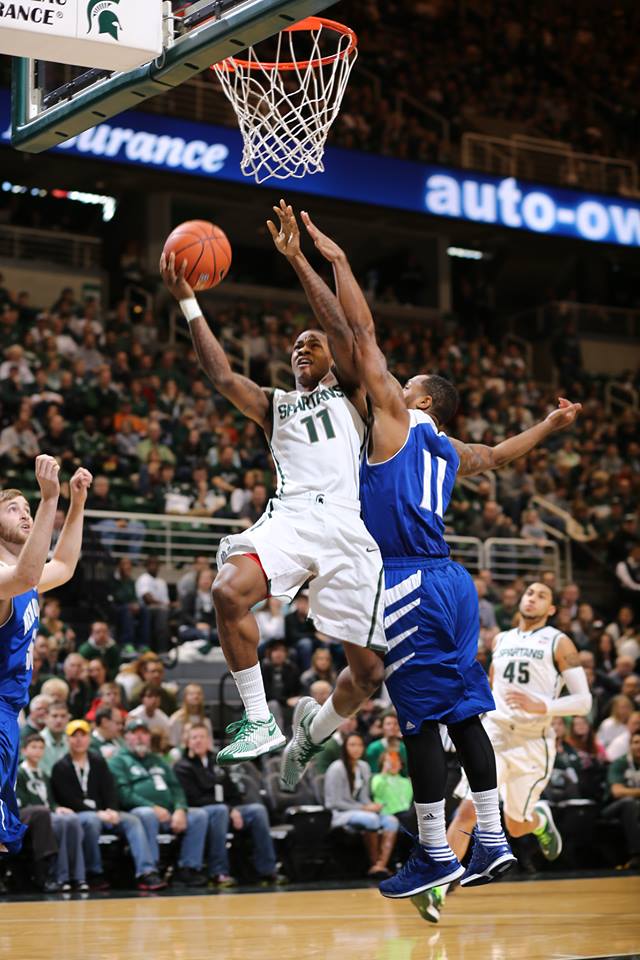 DEC 28 – Coming off a huge win in Austin, the Spartans (11-1) were definitely at risk of having a letdown game against the New Orleans Privateers (3-5). With Branden Dawson ruled out with a shin injury and Matt Costello still not able to play, this game could have looked similar to the Columbia matchup.

Michigan State was shaky to start, committing six turnovers in the first eight minutes. Gary Harris missed his first four shots, and the team started out 3-10 from the field. The Privateers held a slim 10-9 lead at that point, but it was the last time they would be ahead of the Spartans.

Michigan State proceeded to go on a 17-3 run, capped off by a transition dunk by Keith Appling. New Orleans had no answer for the Spartans’ high-powered attack and simply could not keep up with the number five-ranked team in the nation. The combination of Harris, Appling, and Adreian Payne combined for 63 points, 21 rebounds, and 14 assists. The Spartans went on to win the game 101-48.

The Spartans out rebounded the Privateers 54-31, but Izzo was still disappointed in Payne’s performance, saying, “Adreian didn’t focus in early.” He continued, “He had seven rebounds, but it should’ve been 15.” The team shot 54.5% from the field, including 13-25 from beyond the arc.

Here are three factors that decided the game:

Keith struggled mightily in his last two games for the Spartans. He only scored eight against North Florida and four against Texas, shooting a combined 4-19 in the span. Coach Izzo said that Appling’s wrist has been sore ever since the North Carolina game, where he took a nasty spill and used his wrist to break his fall.

Appling started off hot and never cooled down. He scored seven of Michigan State’s first nine points to kick things off. He led all scorers with 16 points and six dimes at the half. With Harris struggling with his shot early, Appling had to step up in order for the Spartans to pull away from the Privateers.

Keith finished with 27 points, eight rebounds and five assists. Izzo raved about Appling, calling him the “biggest thrill of the night.” If the Spartans hit more of their open shots in their first half, Appling could’ve easily had a double-double.

With the combination of coming off a huge road win and two starters not playing, the Spartans could’ve found themselves in big trouble against a pesky New Orleans squad. But Denzel Valentine and other players stepped up and played a huge role. Valentine started in place of Dawson, scoring 10 points and adding 13 rebounds and six assists in 28 minutes on the court.

Alex Gauna also pitched in for MSU, posting six points and five rebounds in only 10 minutes of work. He added a block and an assist, but was limited due to foul trouble. Travis Trice scored five with three assists, but seemed sluggish. According to Coach Izzo, Trice was “sicker than a dog” during the game. Michigan State’s bench scored 22 points on 50% shooting. Coach Izzo is known for squeezing production out of his players, and he certainly did that tonight.

Izzo was pleased with the performance of his bench. He said, “I feel like Mark [Dantonio] with his quarterbacks.” He said he would be comfortable with playing “seven, eight, nine, or ten guys” in the rotation.

Michigan State’s final tune-up game couldn’t have gone any better. The Spartans won by their largest margin of the season and look to get Costello and Dawson back in time for conference play. MSU kicks off the Big Ten season at Penn State on New Year’s Eve. Coach Izzo is not a fan of playing on New Year’s Eve. He said that Penn State is much improved, and “we have our work cut out for us.”

Izzo said in his press conference said that Costello was cleared to play, but wasn’t yet in game shape. He fully expects Matt to play at Penn State.

Branden Dawson, meanwhile, was kicked in the shin during a drill in practice. His leg swelled up but there was no bone damage. Although Dawson didn’t play, he still made a big impact on the game.

Izzo said, “He was a way better coach than I was.”

Dawson is also expected to play against Penn State.