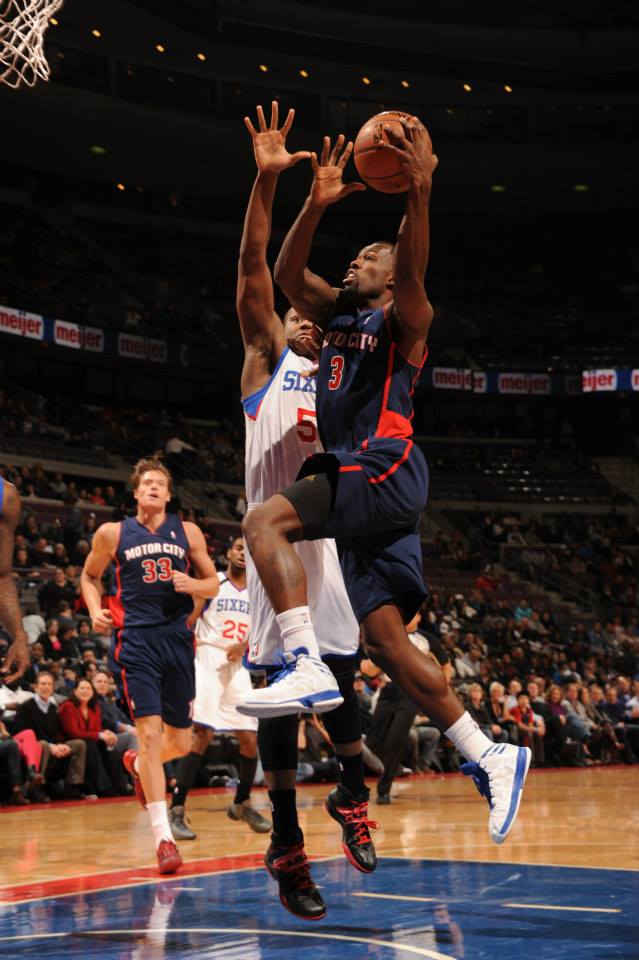 DEC 4 – The Pistons took on Michael Carter-Williams and the Philadelphia 76ers on Sunday at the Palace. Philly had been coming off a tough stretch, losing seven of their last eight before facing Detroit. The 76ers struggle on defense, giving up the most points per game in the league. This proved to be their downfall in Detroit.

Detroit got off to a red-hot start, scoring a whopping 40 points in the first quarter and taking a 15-point lead. Kentavious Caldwell-Pope broke out of his shooting funk, scoring eight points in the first frame. He had been averaging 6.5 points per game in the last four games, so it was good to see the rookie heat up.

The Pistons kept their foot on the pedal in the second quarter, outscoring the 76ers by nine to take a 70-46 halftime lead. Andre Drummond entered beast-mode, scoring 12 in the first half and grabbing 10 rebounds. The Pistons flat-out outplayed the Sixers in almost every aspect of the game. They controlled the boards and shot surprisingly well from beyond the arc.

The 76ers finally got things going in the third quarter, outscoring the Pistons by 12 in the frame. Thaddeus Young scored 12 for Philadelphia and brought the deficit back down to 12. But that’s as close as they would get. The Pistons crushed any chance of a Philly comeback and went on to win by 15.

Drummond had the best game of his career and the best of any big man since Hakeem Olajuwon in 1990. He finished with 31 points, 19 rebounds, and six steals. This game showed just how bright the 20 year-old’s future is in the league. Josh Smith and Brandon Jennings had 20 points each, with Smith hitting 3-5 three-pointers and Jennings dishing out 12 assists. Rodney Stuckey came off of the bench and added 17 points. Rodney is having a breakout season, leading the team in scoring at the perfect time; he’s in the final year of his contract and wants to cash in. The Pistons could get much more for him in a trade than they anticipated at the beginning of the season.

The Pistons took their talents to South Beach on Tuesday to face the defending champion Miami Heat. Detroit continued their hot shooting and took a 10-point lead after the first quarter. Kyle Singler and KCP both had six in the frame. In the second, Miami stayed with the Pistons, but couldn’t make up any ground on the Pistons’ lead. They went into halftime trailing 54-43.

Singler began to hit a groove in the third, scoring 10 points in the quarter and helping the Pistons extend their lead to 14. The Heat were without Dwyane Wade, and Lebron James couldn’t do much against the fearsome Pistons frontcourt. Detroit held on to their lead in the final frame despite a furious Miami rally and went on to beat the Heat 107-97. The win brought their record up to 8-10, good enough for sixth in the Eastern Conference.

Singler led the team in scoring, coming off the bench and adding 18 points. The frontcourt trio of Smith, Drummond and Greg Monroe combined for 41 points and 28 rebounds. The Heat have no post presence and it proved to be their downfall. Detroit had their way with Miami in the paint, scoring 60 down low. Jennings scored 15 with five assists and Stuckey added 16. The Pistons, who are known for bricking jump shots left and right, shot over 50% in the game. Detroit travels to Milwaukee on Wednesday to take on the struggling Bucks.