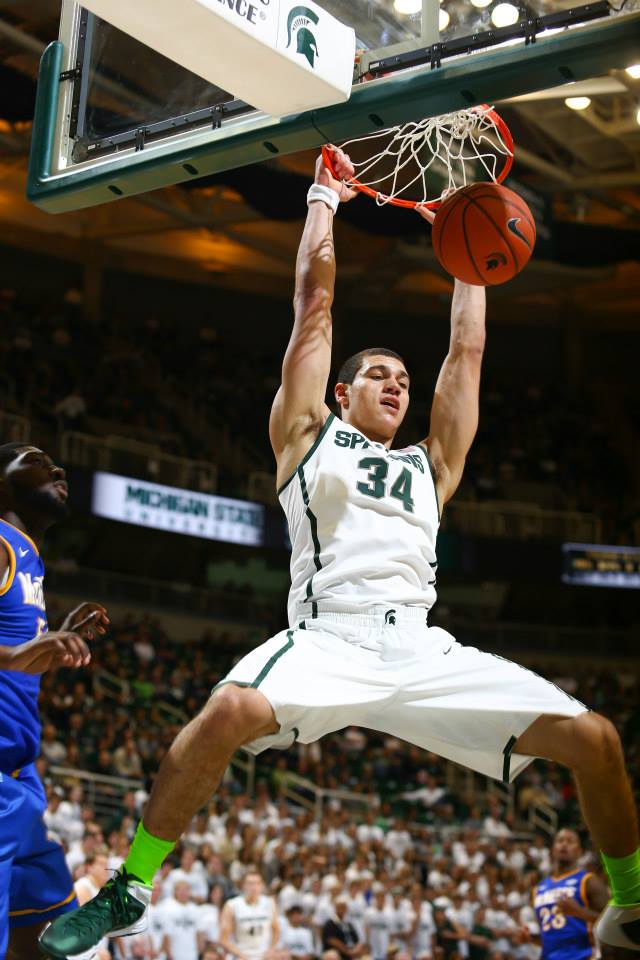 Last Season: 21-12, Lost in first round of NIT to Robert Morris

John Calipari worked his recruiting magic once again this year. He landed six five-star recruits this year. That’s unheard of in college basketball (except at Kentucky, they do it just about every year). It’s likely that four of these recruits will make the starting lineup (Randle, Young, Harrison twins), which means that they’re vulnerable early in the season. A lack of experience and team chemistry could outweigh their extreme amount of talent.

It’s tough to gauge how this year’s team will fare because of how different it is from last year’s disappointment. The 2012-13 team entered the season ranked number three in the nation and failed to make the NCAA Tournament. They ended up losing in the first round of the NIT to Robert Morris. Their star big-man Nerlens Noel tore his ACL in February and missed the remainder of the season. After that loss, Kentucky wasn’t the same team.

Willie Cauley-Stein, the only returning player projected to be in the starting lineup, averaged 8.3 points and 6.2 rebounds last year. Alex Poythress will most likely be the first off the bench for the Wildcats this year. The sophomore averaged 11.2 points and 6.0 rebounds per game last season.

The Wildcats are undefeated in their first two games of the season, beating UNC-Asheville 89-57 on Friday and Northern Kentucky 93-63 on Sunday. Julius Randle, arguably the most talented player on the team, is averaging 22.5 points and 14.5 rebounds through the first two games. Marcus Lee added 17 points off the bench in the first game, but only scored five in the second.

How will the Wildcats match up against the Spartans? Lets take a look:

Julius Randle will be a handful for MSU’s frontcourt. He has been on a tear thus far (although against subpar competition). He can score at will and is a beast on the boards. The Harrison twins have a big size advantage over Harris and Appling. Look for them to be physical and take it to the rim against smaller defenders. The Harrisons are averaging a combined 23.5 ppg compared to 31 points for the Harris/Appling combo.

The most intriguing matchup will be Dawson against Young. Both are the same height but Dawson has a 10-pound advantage. Dawson scored 12 points and grabbed 12 rebounds off the bench against McNeese State. Coach Izzo held him out of the starting lineup because he was late to a team meeting. Dawson should return to the lineup on Tuesday. Young is averaging eight points and 2.5 rebounds per game. If Dawson can consistently hit jumpers in the 15-foot range, he could become a nightmare to defend.

The Spartans obviously have a huge advantage when it comes to experience, which could prove to be the difference. Look for MSU to pressure the Wildcats early and try to rattle the young players. With Kentucky being so athletic, MSU has to be careful in transition. If this game goes down to the wire, which it most likely will, MSU will be the cooler team. Kentucky isn’t used to pressure situations. Most of their players have never played in a close college basketball game.

The game is on Tuesday, November 12 in Chicago at the United Center. Tipoff is at 7:30 p.m. on ESPN and heard on the Spartan Sports Network.