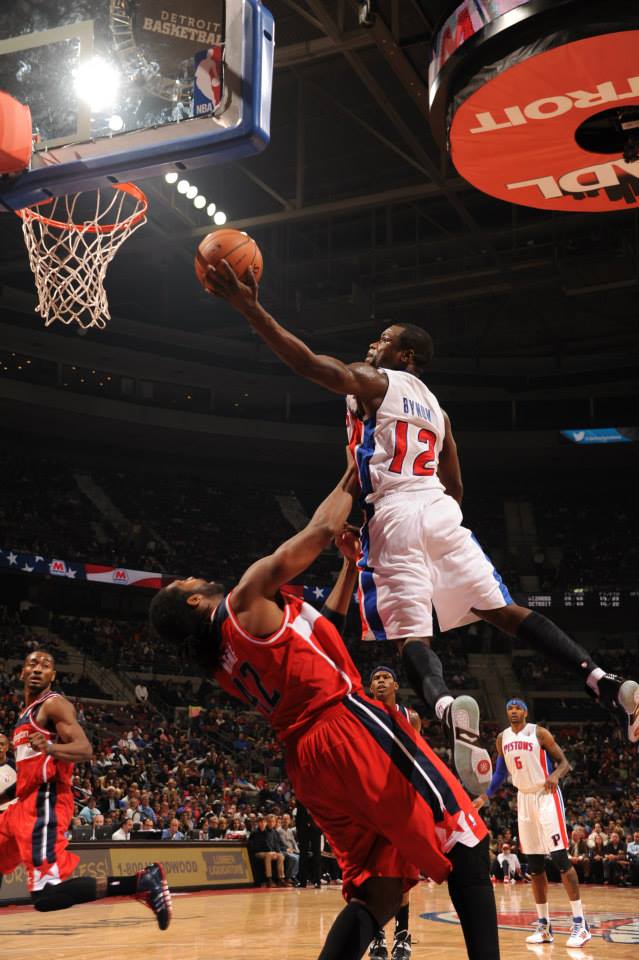 Oct 30, 2013 – Pistons fans have waited 196 days for tonight’s game. It’s a new beginning for a new-look franchise. With promising off-season upgrades and solid draft picks, this year’s team will be entertaining to say the least. But before we get ahead of ourselves, let’s focus on tonight’s matchup.

The Washington Wizards are coming to town with a kind of swagger not usually common with a team that finished with an abysmal 29-53 record last season. Most teams that feel they won’t make the playoffs are really going to try to be horrible this season because of how talented the 2014 draft class will be, but the Wizards are going in the opposite direction. The team traded for Suns center Marcin Gortat for a top-12 protected first round draft pick in 2014 and injured Emeka Okafor. The seven-footer will pair up with the 6’11”, 250-pound Nene to make up a fearsome front court that will challenge Andre Drummond and Greg Monroe.

Wizards point guard John Wall said earlier in the offseason that the Wizards need to make the playoffs this year. He recently inked a five-year, $80 million contract extension, which will keep him in a Wizards uniform through the 2018-19 season. Wall is by far their best player, averaging 18.5 points and 7.6 assists per game last season. A knee injury limited the former Kentucky standout to just 49 games last year, but he made his mark when on the court. He will be the team’s leader for the foreseeable future.

Wall’s running mate in the backcourt is second-year man Bradley Beal. He was drafted third overall last year out of Florida. Beal is a key piece to the Wizards offense, averaging nearly 14 points per game in his rookie season. In his last five preseason games, Beal averaged 23.6 points per game while shooting nearly 57 percent from the field. Last season he was selected to the All-Rookie first team.

Trevor Ariza will get the start at the small forward position for the Wizards tonight. Ariza had a solid preseason, including a 19-point performance in the finale versus Cleveland. At 6’8” and 220 pounds, he will be a tough match up physically for Pistons small forward Josh Smith.

The Pistons finished last season with a 29-53 record. Head coach Lawrence Frank was fired, and Maurice Cheeks was hired. Detroit has really revamped its roster, adding stars Brandon Jennings, Josh Smith, Italian League standout Luigi Datome, and former Piston Chauncey Billups. Expectations are high for the Pistons, who haven’t made the playoffs since the 2008-09 season. They finished the preseason with a 4-4 record, including a victory over the Wizards 99-96 last week.

Andre Drummond and Greg Monroe will have their hands full with the revamped Wizards frontcourt. Monroe had an excellent preseason, averaging 14.8 points and six rebounds per game. He is a virtual double-double machine and looks to improve his game even further this year.

Andre Drummond also had an impressive preseason, showing how dangerous he can be on the boards. He averaged 12.5 points and 12 rebounds per game, including a 20-rebound performance in the exhibition finale versus Minnesota.

Josh Smith missed only one game this preseason, averaging 12.4 points and five rebounds per game. He made his mark as a Piston in the preseason finale, when he hit a game winning three-pointer as time expired. If he can reign in his trigger-happy tendencies and look to drive to the basket more often, Smith could make an appearance on the All-Star team.

The backcourt is banged up coming into the regular season opener. Brandon Jennings has a cracked wisdom tooth and was originally slated to miss three weeks. That would mean he could return November 5 versus Indiana if the recovery is successful. Jennings only appeared in one preseason game, scoring 15 points. Rodney Stuckey has also been dealing with an injury, his a broken thumb that required surgery. He should be able to return to the lineup soon. With these two injuries, Chauncey Billups and Will Bynum will get the start in the backcourt tonight.

Tonight’s match up features two teams on the upswing who look to end playoff droughts. This season means a new beginning for both franchises, and we could possibly see these teams fighting each other for a playoff spot come April.

Prediction for the game: Pistons come out on top 95-89.